Did you know we sell drill bits from 0.1mm? Discover our carbide micro drills and diamond drill bits 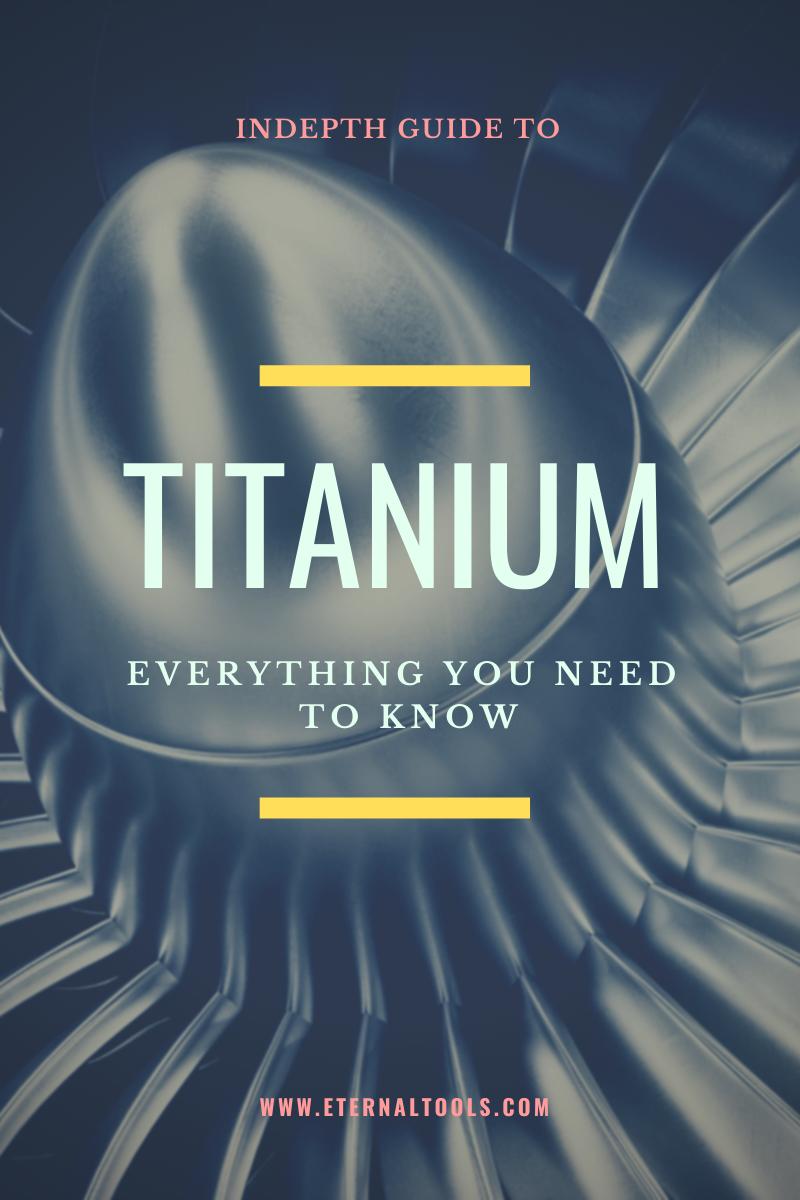 Titanium is a chemical element in group 4 of the periodic table with the symbol “Ti”.  A silver-grey metal with the atomic number 22 and the atomic weight 47.867, Titanium is light-weight, strong and corrosive-resistant.

Titanium has a strength similar to steel, although less dense, and is often used as an alloy form in the aeronautical and aerospace industry on aircraft and rockets because it can endure extreme temperatures.

The common use of titanium is in the form of Titanium Dioxide (TiO2), which is used as a bright white pigment in paints, enamels, papers and art materials.  Titanium Dioxide increases the whiteness, reflectivity and opaqueness of paints and enamels.

Manufacturers combine a specific ratio of titanium mixed with other metals such as aluminium, iron and molybdenum to make titanium alloys for enhanced properties. ASTM international’s grading classification for titanium alloys ranges from grade 1 being the softest and most ductile, to grade 38 being extremely hard with a very high tensile strength.

Titanium is the 9th most abundant element found in the Earth’s crust, constituting 0.44% of the total crust. Two common minerals through which titanium is extracted are ilmenite and rutile.

Along with strength and high corrosion resistance, titanium possesses various other qualities.

Titanium is used in various fields where high tensile strength, durability, fuel efficiency and corrosion resistance are required. Some properties are similar to that of steel and aluminium. It is light weight compared to steel but has the same strength. In comparison with aluminium, titanium is heavier and stronger. 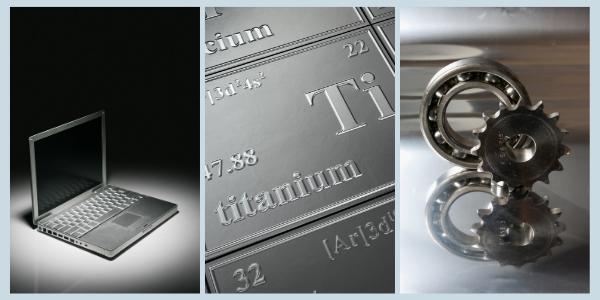 Use of Titanium in the Aerospace Industry

The grade 5 platinum alloy (Ti-6Al-4V) constitutes 50% of titanium use in aircraft, from engines to window frames. It is made up of 6% Aluminium and 4% Vanadium.

Its major characteristics include corrosion resistance, heat tolerance, light-weightiness and strength. It is called the “work house” of the titanium alloys. Its major applications are:

Use of Titanium in the Biomedical Field 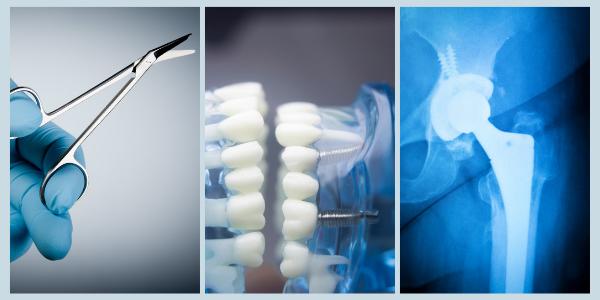 Grade 23 titanium alloy (Ti-6Al-4V ELI) is also called surgical titanium, because of its biocompatible nature. It is widely used in medical sciences as body implants because it is not harmful to the human body and has great inertness. Because of its flexibility, it can be moulded into coils, wires, strands and tubes. Its basic properties are high corrosion resistance, high strength, low modulus, flexibility, light-weightiness and excellent strength.

Some of the uses of titanium alloys in biomedical industry are as follows:

Use of Titanium in the Jewellery Industry 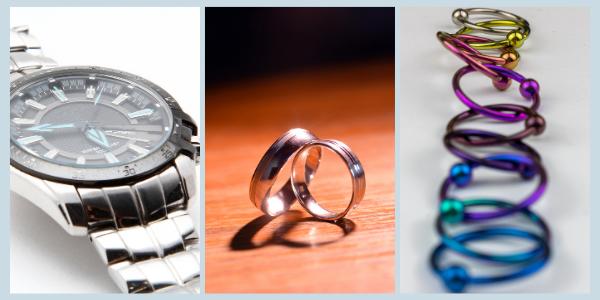 Due to its light weight and less denser properties, titanium is considered a comfortable metal with respect to wearability.

Titanium is hypoallergenic and resistant to corrosion, therefore titanium rings can be worn by people with allergies to other metals, hence it’s popularity for piercings and body jewellery.

Titantium wrist watches from brands such as Seiko, Farer, Tissot, Breitling, Longines, and the Titanium Apple Watch 6 are highly sought after due to the metal’s advantageous properties.

Black titanium is created using a specific grade of Titanium which when heated produces a black coating. However, over time this black coating will scratch off.

Contrary to popular belief, titanium rings can be easily cut off with a ring cutter in a hospital emergency.

What kind of Titanium is used in Jewellery?

The alloys used in titanium jewellery constitutes 6% Aluminium, 4% Vanadium, 0.25% iron and 0.2% oxygen along with titanium. These alloys are stronger than pure titanium.

Working with Titanium for Jewellery Making

Manipulating Titanium to make jewellery with is labor intensive and quite hard, and therefore most jewellers will work with sheets, rods or tubes in their original state as it cannot be cast or soldered. 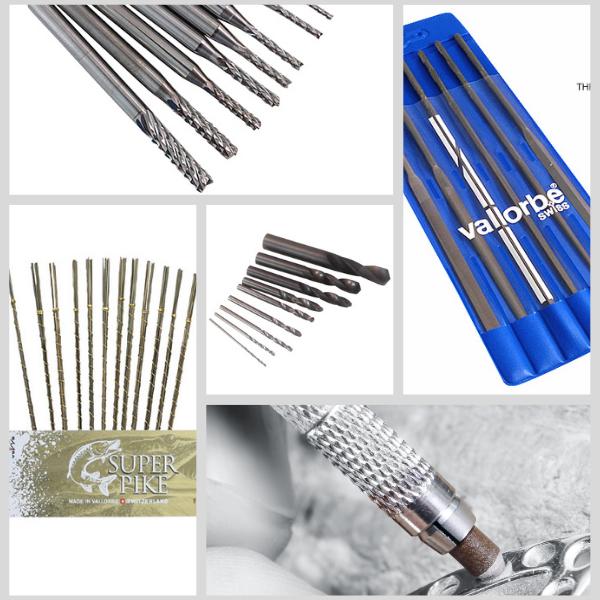 On the Mohs scale of hardness it is 6.5 so Titanium jewellery will scratch, and will eventually leave a satin finish, but this can be very easily polished.

Polishers used for similar hard white metals such as Platinum are also used for polishing Titaniuim. These are often impregnated with a diamond abrasive or a ceramic bond. 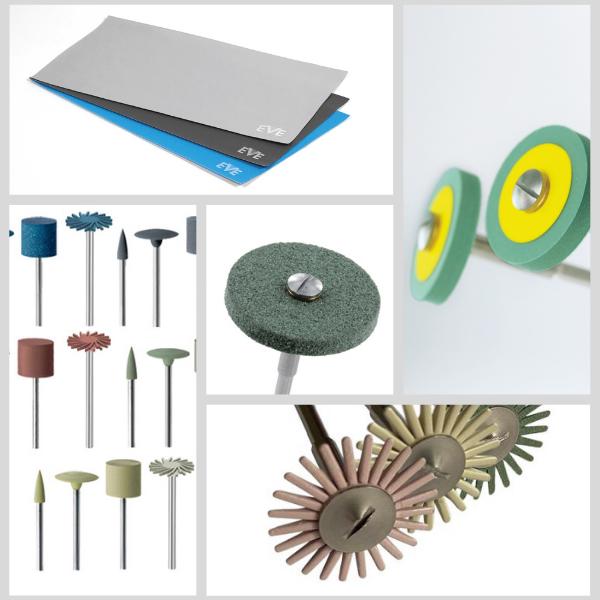 Use of Titanium in the Electronic Industry

Aluminium was previously used in electronics but it is now replaced by titanium because of its huge advantages. It minimises the interference in data processing, has the ability to endure heat during the coating process and the purity of titanium increases the disk capacity.

Use of Titanium in the Automotive Industry

The use of titanium in the automobile industry since the abundance of racing car markets and franchises. Because of its properties such as corrosion resistance, durability, strength, flexibility and heat resistance, titanium became ideal, mainly for the use in engine parts of vehicles.

Advantages and Disadvantages of Titanium

Like all other metals and chemical elements, titanium has some advantages and disadvantages.

Titanium is obtained through several ores residing in the Earth’s crust such as rutile, ilmenite and Leucoxene, using the open pit method.
Workable titanium deposits are spread worldwide, mainly in Australia, Unites States, Canada, South Africa, Sierra Leone, Ukraine, Malaysia, Russia, Norway and many other regions on the globe.

Titanium minerals form in alluvial and volcanic formations. Rutile mineral deposits are depleting and hard to find, so ilmenite deposits are often mined .

Titanium metal from raw minerals, is produced through the Kroll process. This technology is globally used to extract titanium from ores. This process includes many steps such as extraction, purification, sponge production, alloy formation and shaping.

At the manufacturing site, mineral ores like rutile and ilmenite are processed. Rutile can be used naturally, whereas ilmenite is processed to remove iron and obtain 85% titanium dioxide.  As a result of a chemical reaction, impure titanium tetrachloride (TiCl4) and carbon monoxide (CO) is obtained.

The obtained metal is put into distillation tanks and heated to remove impurities, using fractional distillation and precipitation. Metal chlorides of iron, silicon, vanadium and magnesium are separated from the concentrate.

Purified Titanium tetrachloride is shifted into a stainless-steel vessel reactor. After adding magnesium, the vessel is heated at about 1,100°C. To remove air and prevent contamination with oxygen and chlorine, Argon is pumped inside. As a result, liquid magnesium chloride and pure titanium solid are obtained.

Through boring, titanium solid is taken out from the reactor and then reacted with water and hydrochloric acid to remove excess magnesium chloride remains. The remaining element is in the form of a porous metal called sponge.

To make an alloy, pure titanium metal is mixed with various elements and scrap metals. The used ratio of sponge to alloys are determined in the lab, before the procedure is done. After mixing, everything is pressed into a disc like form and welded together to create titanium electrode.

The electrode is then put into a vacuum arc furnace, where it is melted. In this copper container, an arc is used to melt the sponge and form it into an ingot. All of the extra air is removed from the container using argon. The ingot is then reheated and melted a couple of times to create commercially acceptable ingot and shipped to goods manufacturers where it is crushed and formed.

During pure titanium manufacturing, magnesium chloride is obtained, which is recycled in a recycling cell just after it is produced. In this cell, firstly, magnesium metal is separated out and then chlorine gas is produced. Both of these are reused in the production of titanium.
Global Titanium Reserves

Ilmenite and rutile are the two most important sources of titanium. According to United States Geological Survey (USGS), ilmenite constitutes 92% of the global titanium. The total reserves of titanium all over the world are 750 million tons.

The leading countries having titanium minerals were South Africa, Australia, US, China, Canada and India.

In 1791, a geologist named William Gregor discovered an unknown mineral whilst studying black sand in Cornwall, then in 1795, a chemist named Martin Heinrich Klaproth from Germany, rediscovered it in the element rutile, in Hungary. He understood that the mineral contained the oxide of the previously discovered mineral in 1791 and named it “Titanium” after the “Titans” from Greek mythology.

Pure titanium metal was first invented by Matthew A. Hunter in 1910, by heating Titanium Tetrachloride (TiCl4) with sodium under high temperature. This was then known as the Hunter process.

In 1932, William Justin Kroll reduced Titanium Tetrachloride with calcium, magnesium and sodium and named this method the Kroll process.

Then in 1960, titanium metal was used in the Cold War by the Soviet Union for military and submarine components. After that, titanium and titanium alloys have been widely used for many purposes throughout the world.

Titanium is present in two types of crystallographic forms. Pure titanium or unalloyed titanium, at room temperature, has a hexagonal closed-packed crystal type form known as alpha (α) phase. When the same crystal is heated up to 883°C, it transforms into a body-centred cubic structure called beta (β) phase. The experimentation of these crystallographic structures by adding different alloys in a thermochemical process, led to the production of various alloys with different properties. The major classification of titanium alloys based on their phases are: α alloys, β alloys and α +β alloys.

Alpha alloys contain metals such as aluminium and tin. These metals have α-stabilizing agents that perform their duty by inhibiting change at the phase transition temperature.
Alpha alloys have a higher creep resistance than beta alloys, and is therefore preferable to be used in high-temperature appliances and machinery. Unlike beta alloys, alpha alloys miss ductile-to-brittle phase, making them ideal for cryogenic applications.
The properties of alpha alloys include intermediate strength, toughness and weldability. Alpha alloys cannot be strengthened by heating.

Alpha and beta alloys are composed of a mixture of alpha and beta phases, having 10-50% of beta phase achieved at room temperature. The most common alpha beta alloy is Ti-6Al-4V, which is difficult to form even in forged condition. Other alpha beta alloys usually have good formability. The general characteristics of these alloys can be controlled through heat treatment that is used for identifying and adjusting the amount of beta phase present in them. The process involves using a solution treatment and heating it up to 480-650°C , tempering thus the alpha crystal, alpha and beta mixing with each other properly.

The third class is beta alloys. When a transition or β-stabilizing elements are added to titanium, all types of beta alloys can be manufactured. These elements contain vanadium, niobium and molybdenum. These elements decrease the transition temperature of α to β phase, thus producing a body-centred cubic (bcc) β phase. They tend to show outstanding forgeability on wider range of forge temperatures, as compared to α alloys.

Some useful properties of beta alloys are their hardenability and readiness for high temperatures. Beta alloys are more cold workable than the alpha beta alloys, and can be strengthened through heat.

Some β alloys have a powerful corrosion resistance to commercially pure grades. A common thermal treatment includes solution treatment along with heating at temperatures of 450°C to 650°C. Finely spread α particles are obtained in the retained β particles, through this treatment.

This major classification is further divided into ASTM International grades. Pure titanium grades are 1, 2, 3 and 4. Titanium alloys are graded 5, 7, 11, 12 and 23. Grade 5 titanium or Ti-6AL-4V is the most frequently used alloy all over the world due to its many benefits. It is widely used in the aerospace and automotive industry’s, medical sciences and chemical processing factories.

Titanium is a metal having outstanding properties with many applications. The use of titanium as a substitute for aluminium, steel or iron is unlikely due to cost,   the high energy consumption and the high-cost machinery to process it. Because of these disadvantages, titanium cannot be considered as a future substitute metal,  but where high strength, corrosion-resistant and flexible metal are required, Titanium will continue to be desirable.