International Deliveries Due to the recent Royal Mail cyber incident all international deliveries will be shipped via alternative couriers. We hope to resume Royal Mail services as soon as possible. 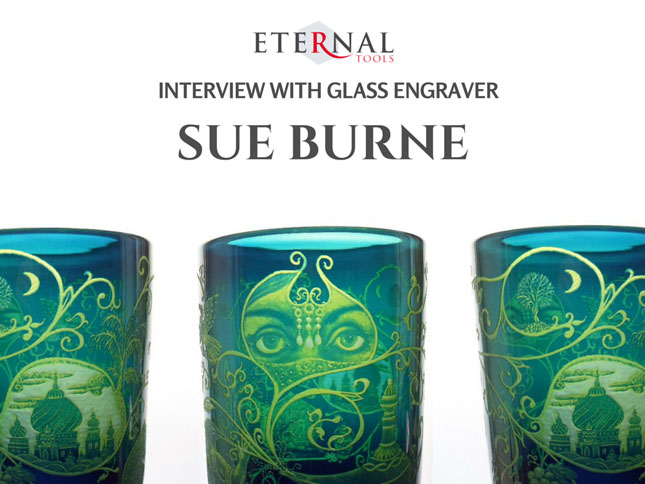 Sue Burne is an Associate Fellow and current Chairman of The Guild of Glass Engravers as well as being an elected Craft Member of the Somerset Guild of Craftsmen. .
Her glass engraving work is done with a hand drill using diamond and stone burrs.

What inspired you to start glass engraving?

In April 2001 my late husband bought me a basic starter engraving kit with a little micromot GG12 Proxxon drill and a transformer. Previously I had done quite a lot of calligraphy and pyrography so he thought the skills might be transferable.

I realised I enjoyed engraving glass immediately but I was frustrated that I couldn’t achieve the sort of effects I could see from researching the work of others online.

I joined the Guild of Glass Engravers in January 2002 and started attending the South West England branch work days. Everyone was very helpful and kind and after a while I was assigned a mentor through the Guild.

The well-known engraver Chris Ainslie (who is a Fellow of the Guild) helped me through the next few years until I achieved Craft Membership of the Guild in September 2005. Then in October 2009 I was elected an Associate Fellow.

Do you have a studio space you work from?

I used to work in a tiny loft space climbing up a ladder to get to my desk and drills. If I had bigger pieces to engrave I had to do them in the conservatory. Sadly my husband died in 2010 but I was able to convert his old workshop (half of a long garage) into a new studio for me. Now I just have to go across a corridor to get to work.

Last summer I had a veranda space at the back of my studio filled in with a glass wall as an extra and very light craft room. 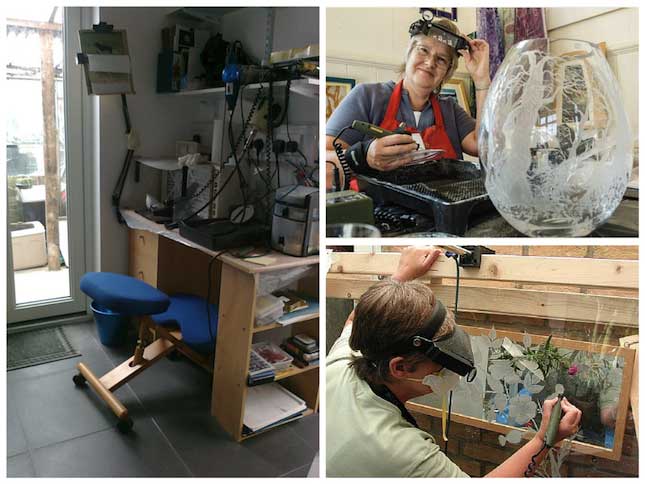 What aspect of your work do you enjoy the most?

I really enjoy doing my own designs on good quality glass. When I can do very 3D intaglio work on clear lead crystal or when I have a beautiful piece with layers of coloured glass it is very satisfying to carve away at the glass.

I don’t have music on while I engrave but time flies by when I am “in the zone”.

Sometimes it feels as if I am releasing imagery which is already inside the glass.

The less exciting work is doing duplicates. I tend not to do multiples of anything. 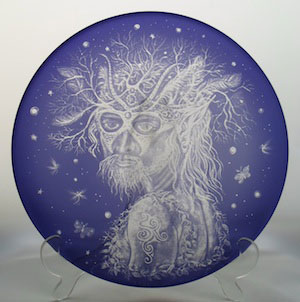 What inspires your designs?

I love doing myths and legends. I live in Somerset near Glastonbury and the ancient Isle of Avalon, but I don’t just stick to Arthurian legends for source material. I also enjoy using imagery from nature, especially if I am doing engravings from actual plant material I have picked.

I like my work to tell a story when possible.

Has discovering glass engraving changed your life in any way?

Becoming a glass engraver has changed my life for the better. I have made numerous friends through the Guild of Glass Engravers and through the Somerset Guild of Craftsmen.

I have a holiday home (a static caravan) on the coast of West Somerset and now several of my glass engraving friends have joined me there and bought vans on the same site.

Do you have a favourite piece of work?

I have two favourite pieces at the moment. One is “The Wife of Llew” which is a Welsh legend and the other is “Scheherazade” which is engraved with imagery from the Arabian Nights.

“The Wife of Llew” is a huge vase with double overlays of light and dark blue over clear glass. This was blown by Carl Nordbruch. (See below images)

“Scheherazade” was blown for me by Sonja Klingler with blue and green over clear glass. (See main header image) 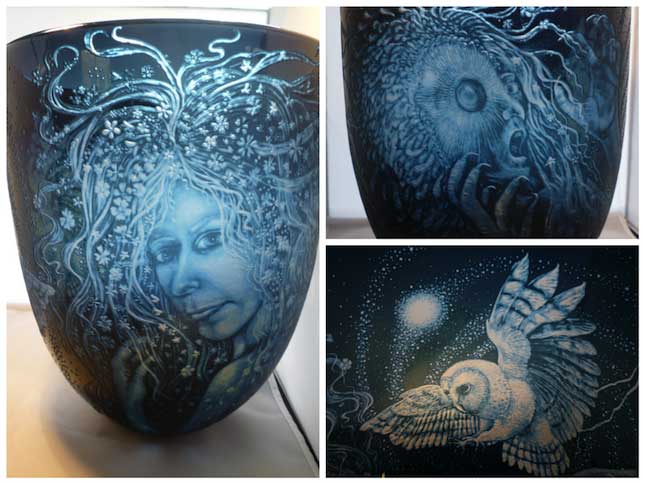 Tell us about where you sell your work and any upcoming exhibitions.

I sell through several galleries in Somerset. At the moment my work is in The Courthouse Gallery (home of the Somerset Guild of Craftsmen) in Somerton.

My work is also in The 303 Gallery in Martock, The Cottage Gallery in Wedmore and is usually also in Sea Breeze in Burnham-on-Sea.

Further afield I normally exhibit annually in Sweden in Johansfors and I am currently exhibiting as a guest artist at Obsidian Art near Stoke Mandeville.

Later this year I shall be exhibiting with the Guild of Glass Engravers at our major exhibition at the Red House Glass Cone in Stourbridge from 18th May-26th June 2015. It is our 40th anniversary year and our exhibition will include the period of the International Festival of Glass. I also sell work on commission. 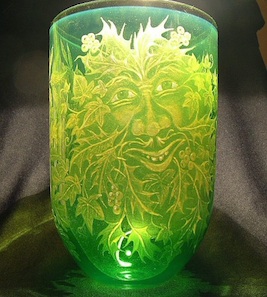 What tools could you not live without?

I need my drills and my favourites are still the little Proxxon GG12 handpieces. I have small hands and find larger drills too bulky. I also need my larger flexi drive drills with big burrs for deeper carving into glass.

What's the best piece of advice you can give to someone wanting to start up their own craft business?

I would suggest they join a group of like-minded craftsmen. Working in your own studio is great but it can be lonely. Belonging to a Guild or similar group means being able to learn from others and gives craftsmen and artists the chance to exchange ideas.

What's in the pipeline?

My next big piece is a 3 panel window for a church in Bedfordshire. I have several other commissions lined up and I need to produce some exhibition pieces. 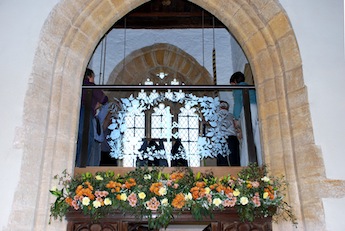 Tell us one thing about yourself that we don't know.

I am firmly rooted in Somerset. I wasn’t born in the county but moved here to work many years ago in my early 20s. However I am a very keen family historian and have traced my Somerset roots back many hundreds of years.

A huge thank you to Sue for sharing her work and thoughts with us. If you would like to see more of Sue's work or enquire about a commission piece, go to her website at: http://sueburne.com/