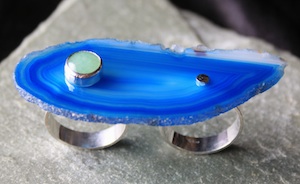 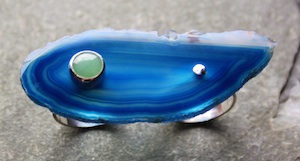 To make the two finger ring, Cara measured the distance between both fingers before drilling into the agate using one of our 2mm diamond core drill bits. She then made the silver ring bands, each with a 2mm round silver wire post on top which will be used for the riveting. The stone setting for the Green Adventurine was made and a 2mm round hole was drilled into the middle of it, then she riveted the setting onto the top of the agate and ring band very carefully. Cara then went on to rivet the second ring band onto the agate and textured the rivet using a round doming punch, then carefully set the stone! Beautiful I think you'll agree.